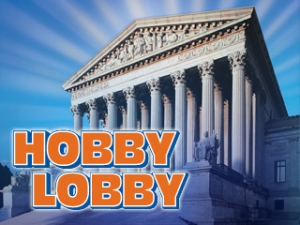 I don’t want to write about Hobby Lobby.

This is not my issue.

This Supreme Court ruling doesn’t affect my daily life. Here in Canada, healthcare is universal, and while birth control (for both men and women) isn’t always covered under the public mandate, it is usually covered under extra employment health benefits if prescribed by a doctor.

And if anyone is wondering, the health plan that covers the pastors of my denomination does include coverage of all the birth control that Hobby Lobby wanted to be exempt from paying for. So not all Christians agree with Hobby Lobby’s religious views on birth control.

But today, I have to write something. This Hobby Lobby issue is nagging my writer’s soul.

Shortly after the US Supreme Court’s decision, I tweeted some questions and comments regarding the decision. The ruling brings up so many questions, including how it is that a corporation can have a religions belief. I guess Americans believe in the separation of church and state, but not separation of church and corporation. One of my tweets resonated with a lot of people:

@UnvirtuousAbbey Jesus said, “Take up your cross and follow me, unless you are a corporation, then make your employees carry it” #HobbyLobby

These questions about the personhood and religious belief of a corporation are deeply troubling, even for a Canadian like me.  Yet, more and more I am thinking about this issue affects women and how Hobby Lobby, with their “religious belief,” understands women and what they have been granted the authority to do on the basis of religious belief.

As I read through articles on the fallout of this decision, I came across a couple of great articles explaining the science of what Hobby Lobby is claiming about birth control and why it is so wrong.

(Update: If you want to read even more about abortificients, read this article)

However, as with the Creation vs. Evolution debate, the science doesn’t really matter to fundamentalists. The pseudo-science of creation and their understanding of birth control is only a means to an end. And that end is promoting a deeply flawed, yet self-serving, understanding of scripture.

Today, I am sure many people wonder, what exactly is Hobby Lobby’s issue with women. Why do Christian fundamentalists like the owners of Hobby Lobby, the Southern Baptist Convention, the Gospel Coalition and many mega church pastors make such a big deal about issues of contraception, LGBT issues and the role of women in church and home. They will claim their view is scriptural… and well it is… kind of. In fact, these groups probably don’t really understand just how scriptural their views on women are… and just how much they miss the point.

The fundamentalist Christian problem with women originates from these unlikely places in scripture:

1. The concern for the sanctity of life in much of the Bible is not necessarily for all life, but Israelite life. The book of Genesis shows that one the of the chief concerns of the descendants of Abraham was continuation of the line. It wasn’t life in general that they were concerned about, but particular life. This is why God killed both the enemies of the Israelites who fought them in battle and God killed the sons of Judah who spilled their seed on the ground. They were all “killing” the descendants of Abraham and so God judged them.

The whole book of Genesis is about how the line of Abraham hovered near extinction for generations, yet God had made the covenant of many descendants and land. The chief concern of the Israelite people was continuing the line. This was the path to immortality and legacy.

2. The ancient understanding of reproduction categorized men and women differently than now. Seeds or sperm (the same words in Greek and Hebrew) were believed to contain the entire person. So to be someone’s descendant meant you were contained entirely (in a tiny seed) in your father, grandfather, great-grandfather etc… So when people protested to Jesus that they were the children of Abraham, they meant that they had literally been inside Abraham at some point.

Women were understood to be the field. A seed was planted in the field, died and turned into fruit. If a seed didn’t grow, it was because of an inhospitable field. This is why only women are barren in scripture. Wombs and fields come from the same word in Hebrew.

3. Women were property. Many books and articles have been written about how women were property in the bible. And this is correct, but chattel or animal property wouldn’t exactly describe it entirely. Animals required some care, but women were more like land (fields where seeds were planted). Land was plowed (torn up) in order to plant seeds. When it didn’t produce it was plowed even more.

Just as farmers were concerned about neighbours planting and harvesting over property boundaries, husbands were concerned about someone else’s seeds getting planted in their wives’ wombs. There were no paternity tests, so the only way to make sure your line continued was to maintain strict control of your land/womb. This is how a deceased man’s brother could provide children to his widowed sister-in-law. Brothers carried the same seeds from their father, the woman was simply the field.

4. Adultery was not an issue of fidelity. In the same story of Judah’s sons spilling their seeds, it was natural that Judah would go to a prostitute. Men have needs. However, an adulterous woman is like damaged property. A man could never know if his kids are his if a woman cheated or if she is raped. Another man has sowed his seeds in the field. Damaged property is pretty much only good for destruction. This where the one sided laws in the Middle-East and Africa that punish rape victims come from. The punishments are a means for destroying the damaged goods of men.

Now, conservative fundamentalist Christians will not tell you that these are the biblical understandings of reproduction and gender. However, this is where these issues about birth control come from – Ancient, patriarchal and misogynist understandings of science and gender.

Despite Hobby Lobby and other conservative Christians adopting these biblical world views (however rooted in incorrect ancient science), these views are not Christian.

Jesus and early Christianity takes a very different view on women and gender.

1. In the Gospel of Mark (the earliest gospel), Jesus forbade divorce without condition (unlike in Matthew who adds the adultery clause). Jesus was not making a moral judgement, but advocating for women. Divorce was a means for men to summarily dismiss their wives, to have them stoned for adultery so they could get rid of them. Forbidding divorce empowered women. Men could not hold the threat of dismissal (which would lead to poverty or death) over their wives. Jesus himself would not have been born if Joseph had decided to have Mary stoned for adultery. Jesus was putting husbands and wives on a level plying field.

2. Jesus often talked to women, included them as disciples, and appeared to them first after the resurrection. Jesus was constantly breaking social norms to talk to women in public, thereby treating them as equals. Jesus included women as disciples, like his own mother, Mary and Martha, and Mary Magdalene. Women were the first to find the empty tomb and the first to announce the resurrection. This was the most important moment of Jesus’s ministry, and he chose to entrust women (who were not trusted as reliable witnesses) to witness the event.

3. The early Church was radically egalitarian. The apostle Paul wrote that there is neither Jew nor Gentile, Slave nor Free, Male nor Female in the community. But not long after, the Christian community began partriarchalizing itself to fit in better with society. Other later New Testament letters advocated patriarchy, and Paul’s own writings either had additions or have been misinterpreted and mistranslated to favour patriarchy.

Jesus and the early church stood in stark contrast to the prevailing patriarchal system. You might even say that they didn’t hold biblical views on women and gender. Conservative Christians would claim Jesus and Paul weren’t biblical if the two were preaching and writing today.

Hobby Lobby fought for the corporation’s right to hold biblical views, and use those views to unfairly discriminate women. (It has been noted since that they invest in companies that make birth control and still pay for men’s contraceptive products.)

But Hobby Lobby and conservative Christians are either so woefully ignorant of why the bible views women as it does and what Christianity actually teaches about gender or are intentionally using “religious belief” to justify sexism.

I suspect there is a good dose of both happening.

On Monday, I was very glad to be Canadian. The US Supreme Court has been duped, or, more likely, is striving to maintain a patriarchal world. And that is what this is really about. It is not about being against contraceptives (the science disproves the “abortificant” argument), it is about being sexist, misogynist and patriarchal. This isn’t about being biblical, this is about the fear of a loss of power, specifically male power over women.

Even from a far, I am still deeply saddened today by the state of religious affairs in the United States. Saddened that there are Christians who believe this is about religious freedom. Saddened that corporatists, privileged white males and misogynists are using “Christianity” to promote their agenda. Because actual Christianity is completely opposed to what Hobby Lobby stands for.

I wonder how the Supreme Court would have ruled if this were about men’s contraception, or if an employer were asking an insurer to cover even more healthcare benefits because of religious conviction.

How do you feel about the Hobby Lobby decision? What was your reaction Monday? Share in the comments, on the Facebook Page: The Millennial Pastor or on Twitter: @ParkerErik.

PS Twitter has been flagging my blog as spam lately. If you would like to help get it unflagged (because according to wordpress and google it is fine), file a ticket with a link to my blog here.