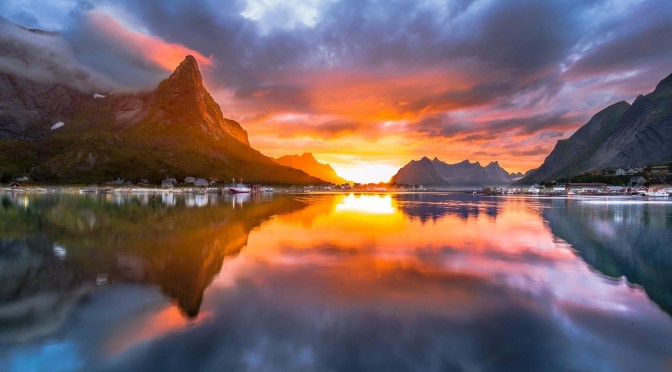 When my grandfather’s family immigrated from Norway, my understanding is that they landed first in Minnesota, where a lot of Scandinavian immigrants settled. But before long, many of these immigrants were longing for home, particularly for the Fjords of Norway. So a group of them decided to pick up and move to a place that reminded them of home the most. From Minnesota they moved to the coast of BC, to a place called Bella Coola. A tiny community nestled in the Fjords of BC. A community on the water but also among the mountains. A place where  sometime in late fall the sun would fall behind the mountains, not to be seen again until the end of winter.

I always thought this was a strange decision and I wondered why my ancestors made it.

Then I moved to the Red River Valley myself. Most Manitobans probably don’t think about this much, but there are virtually no hills here, no variation to the topography. If you know where to look you can find a hill, but they are not common. And no, driving over the Disraeli bridge does not count as a hill.

The uncommon hills here are nothing compared to the hills and valleys found around Edmonton where I grew up, or the rolling prairie to the east, or mountains to the west.

There are times when I long for a hill or two. And certainly there is strong sense of belonging whenever I am in the mountains – I think it is my Nordic blood.

A few years ago, on one of our trips to see family out west, we were coming into the mountains just outside of Calgary when our daughter Maeve started complaining that she couldn’t see. We thought she meant she couldn’t see because of a pillow or blanket blocking her window, but we quickly sorted out that it was in fact the mountains themselves that were blocking her view of the sky (I think we are raising a real Manitoban…).

Maeve is not the first prairie person to get panicky driving a mountain highway. I also know a few folks from BC who find the open skies of the prairies unnerving.

As we navigate our way through the mountains, valleys, and flat places of Advent, I think there is something to the way God is working in and through our different perspectives.

Flattened mountains and filled in valleys and straight paths don’t particularly excite me, but they might be a relief for some.

The short days and long nights of winter might be something to be endured for some, but a sun that falls behind the mountains might feel like home for others.

Advent is all about shifting our perspective. The stories we tell demand that we re-think the way we see the world.

The End becomes the Beginning.

John the Baptist’s bombastic preaching to wilderness crowds points us to a baby born in quiet and out-of-the-way manger.

A young teenager, getting pregnant out of wedlock becomes the one in whom God is birthed into the world.

The Messiah joins in with the life of creation in order to overcome death on the cross, and show us to new life.

And finally, when we are tired, achy, slowing down, feeling as though we might be dying… when our lives, when the church, when the world feels as though things are falling apart… it might actually be something else.

We just might be pregnant with new possibilities, soon to be entering into our world, changing our perspective on just what God is doing with us.