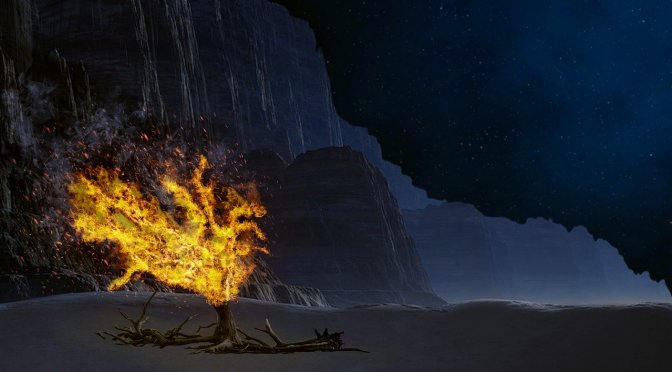 GOSPEL: Matthew 16:21-28
…22And Peter took him aside and began to rebuke him, saying, “God forbid it, Lord! This must never happen to you.” 23But he turned and said to Peter, “Get behind me, Satan! You are a stumbling block to me; for you are setting your mind not on divine things but on human things.”

What would you say?

Here we are, the last Sunday in August, heading into the back half of this long season of green. This time should be about soaking in those last few days of summer break, the last few days of of that relaxed pace of life before the fall ramp up. And instead, we are far too much in the same headspace as Moses and Peter. Confronted with a world fraught with danger that we would rather avoid.

Last week we began with the book of Exodus and the story of Moses, who was just a baby boy. He is hidden from danger, adopted by princess, raised in Pharaoh’s household. He kills an Egyptian slave master and flees. Eventually he settles in the land Midian, takes a wife and becomes a shepherd.

And it is while living this new life that he comes across the burning bush… and discovers that it is the God of Israel, coming to call Moses back to his people. But Moses isn’t so sure about this idea of God’s.

Peter on the other hand has just confessed last week that Jesus is the Messiah, in response to Jesus’ question about who people are saying that Jesus is. Yet with Jesus’ words of praise still hanging in the air for Peter’s confession, Peter bungles it up by scolding Jesus for talking about dying.

You would think that both Peter and Moses, when faced with God in fire and God in flesh, would take a moment to choose their words… but they don’t.

But why they don’t is a little more complicated than it seems. It isn’t just that Peter likes to put his foot in his mouth. It isn’t just that Moses has a phobia of public speaking. It is that the burning bush and a cross focused Jesus evoke versions of the world that Moses and Peter are trying to leave behind.

Moses doesn’t just want to avoid speaking to a crowd. He is avoiding his old life, the imbalanced world of powerful Pharaoh enslaving an entire nation. The contrast to the life of luxury in Pharaoh’s court with the suffering of Moses’ people.

Peter in the same way wants Jesus to avoid the world of the Pharisees and the Scribes. The imbalanced world of the religious haves and have-nots. The risks of facing up against the powerful religious elite who will do almost anything to maintain their power and status.

Moses has a good life being a shepherd in Midian. Peter has found a good gig following this popular miracle worker around the country-side… Neither want to wake up and face the real world full of death and suffering.

And so they protest. Moses protests to the burning bush. Peter scolds Jesus. When faced with God’s summons towards the danger for the sake of God’s people, both hesitate and try to stay in the relative comfort.

And just maybe we understand Moses and Peter in 2020 more than ever before. We have been surviving a great ordeal ourselves. We have and are enduring pandemic. We watched and prayed for the sick, for health care workers, we stayed home for the sake our neighbour.

And then in the middle of a pandemic, the murder of yet another black man, George Floyd set the world on fire. Protests erupted all over the world and even in our own city.

Yet that was June. And now it is August… and as the pandemic stays mostly, kind of, almost under control, our world opens up to some semblance of a new normal. Even as we wonder about plans for back to work and back to school and of course back to in-person church.

At least there is hockey, basketball, and baseball all at the same time.

It is… or was… almost a world we can live with and be kind of comfortable in.

And then there was another cop shooting an unarmed Jacob Blake in Kenosha, Wisconsin. And  a big Hurricane slamming into the South-East United States. And there are renewed protests, vigilante shooters barely touched by police, and forget watching basketball, baseball and hockey this week – players are boycotting.

Then there were the days of record cases numbers and more covid deaths in our province.

And all of sudden it feels like we are cowering in front of a burning bush or an angry Jesus reprimanding us for thinking that we could just stay in that kind of comfortable world we thought we had found.

So what would you have said?

How would you have responded to I AM who I AM?

What could you say to the Christ who says, “Get Behind me Satan” to you?

Peter gets reprimanded by Jesus for thinking of human things and not divine things.

Moses is informed that his fears aren’t sufficient for shirking God’s call.

As Moses pushes back, the burning bush promises that Moses will be given what he needs to face the future. That God’s plan for Moses and God’s people isn’t just danger and the risk of death. God has more mind, God has a new and different future in store for a people stuck in slavery. And God promises to go along side Moses each step of the way, God promises to provide a community to support Moses and work with him.

And as Peter pushes back against Jesus’ talk of death, Jesus reminds Peter and the other disciples of the promise at the heart of the incarnation. It isn’t just a promise to wander the country-side doing miracles, being popular with the crowds.

The Messiah, that Peter has just named, has come into the world for the salvation of God’s people. For their salvation from danger, sin and death entirely. The Messiah is on the road to confrontation with religious and political authorities, on the road to confront the danger, and to do something about it, to transform it by ushering in the Kingdom of God. By reconciling the great “IAM who I AM” with all creation, by undoing the power of death through the promise of New life found only in the One who us the source of all life, by declaring that after the death on Friday there will be resurrection on the third day.

God’s promise is that danger, sin and death are not the great powers of this world. That they are not the ultimate authorities over us.

God’s promise is the very place of salvation. The promise given to the Israelites who escape slavery and find the promise land, and those who don’t, those didn’t make it out of Egypt, those who didn’t leave the wilderness are still bearers of the promise.

And God’s promise to us, in the midst of a world on fire, a world battered by storms, a world rife with fear is given to us who have heard the good news, and those who have yet to hear, those who hear but doubt, those do not hear at all.

For you see God’s promise transforms us, just as it has transformed God’s people from the beginning. For God’s promise declares that right here and right now, that the dangers, sufferings, sins and death of the world will not define us. Whether we follow, whether we protest and push back against God’s call, whether we long for the small bit of comfort that we can find, or whether we take up our cross and follow Christ into the future.

God’s promise re-defines and returns us to God. God’s promise that declares that we belong to the God of creation and life, the God resurrection and new life.

And today, we might protest and push back against this promise of life in favour of comfortable death… But God makes and bestows the promise none the less. Moses leads God’s people out of slavery, Peter follows his teacher to the cross, and God promises to carry us through this ordeal as well. We might not all see the other side, but in the promise God has already given us salvation.