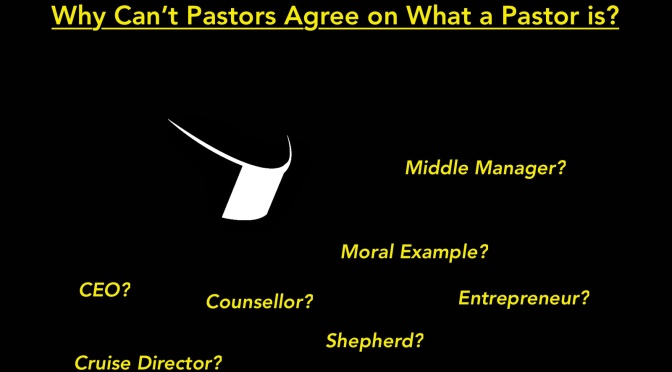 What DOES a pastor do anyways?

This vagueness around the job description and theological concept of being a pastor is one of the most frustrating parts of my vocation. The debate lately seems to be between the pastor as CEO vs. pastor as Shepherd. Just check out the titles of some relatively recent blog posts:

Why you should be thankful if your pastor behaves like a CEO by Carey Nieuwhof
CEO-style pastorates all the rage but offer little to those seeking deeper faith by Jim Brumley
Quit Telling Pastors We Have to Stop Pastoring to Have a Successful Church: Great churches don’t need spiritual enablers or high-achieving CEOs. by Karl Vaters

The current debate raging online, and probably in churches and among colleagues, about what a pastor is and does is nothing new. It is simply a symptom of the church facing the changing world and some dim sense that part of facing that change means pastors and churches updating their understandings of each.

Even in my short millennial life-time, I have seen pastors of different generations try to live up to different and changing ideas of what it means to be a pastor.

In my first congregation, a small farming community where the church had been the central focus for nearly a century, pastors were understood to be something akin to the “community professional.” In the early part of the 20th century, pastors were often called upon not only to shepherd the flock, but also provided medical knowledge, taught school children, provided legal and mediation services among other things.

In my Grandfather’s generation in the 40s and 50s, pastors were public moral paragons. They were (supposed to be) living examples of moral living who were required to lead the faithful in their own moral living and a disciplined faith full of regular devotion and study. Pastors were expected to be public moral authorities whose credibility was rooted in their character and leadership position. They were called upon to serve on public boards, public offices and positions and were often in the public eye.

And then in the 60s and 70s, Clinical Pastoral Education and a trend towards psychology and therapy transformed again the role of the pastor. No longer was the pastor a voice for morality and divine authority, but now a counsellor, therapist even. Someone to hear your troubles (sometimes on God’s behalf) and direct you to the help you need. And pastors started using as much the language of psychology as theology.

And then 80s and 90s, when, despite the early signs of decline, the trend was for established and growing congregations to program their ministry. This meant large facilities and increased staff positions. Pastors became middle managers, overseeing growing churches that had become corporatized. Business language become the vernacular at board meetings and for church leadership.

And then in the 2000s, pastors were called upon to become entrepreneurial CEOs, revitalizing the unwieldy and declining organizations that had been started by the community professionals and moral paragons, grown by the pastoral care providers, and managed into decline by the middle managers. Pastors were and are expected to be the source of mission and vision renewal for churches longing for a return to the glory days. The glory days of course depend on which of the previous eras felt the most glorious for a given person. And the new glory days also include incorporating all the new technology of a changing digital and online world.

These are, of course, not the only dominant forms of pastor that have risen up recently. There are several of other images and ideas about what the primary role of a pastor is:

There is the social justice warrior, who leads their faith community in striking out to address all the evils of the world. This pastor strives to lead people in activism and to organize communities of resistance beyond congregations who will fight for justice among all the injustices that exist in the world.

And there is the cruise director / country club pro who is the omni-present social glue that holds the many activities and programs and fellowship events that a congregation plans. The pastor will likely make an appearance at everything: every meeting, every breakfast, every golf or curling fundraiser. The pastor is more mascot than spiritual leader.

And there is the coach and cheerleader. The person encouraging the laity in their calling by passing off the bulk of the responsibilities of the pastoral office. A pastor’s job is to put themselves out of a job is mantra of this style.

So which of these is the right style or idea of the core of pastoral ministry is? Should pastors need to choose?

But none of these shifting ideas about what it means to be a pastor are core to pastoral ministry as it has been understood for most of the church’s history. Pastors or priests have always been tasked with preaching the word, administering the sacraments and tending to God’s people. And throughout the millennia, this has put various responsibilities on the shoulders of pastors, managing and tending to groups of people wherever they are is complicated.

Yet, whatever trend or style of ministry is current, and even whatever denomination or part of the world  a pastor serves in… the essential of what is a pastor is the same.

Pastors bring the Church to the church.

Whether it is the through high church smells and bells liturgy or someone standing alone on a staff with just a bible in their hands, whether it is providing expertise, modelling faithfulness, caring for those in distress, managing complicated communities, or revitalizing declining churches pastors are the connection through which a particular faith community (a church) encounters the faithful of all times and places (The Church).

The Office of Ministry is how The Church enters into the life a church or congregation. In all those things that the debates suggest that pastors should be spending their time on, the underlying purpose of doing any of those things is to help local and particular communities be connected to the body of Christ. To help local congregations participate in the mission of the whole Church, to proclaim the gospel of Jesus Christ to the world. And we don’t do this in vacuums, rather we serve this mission in consort with all the congregations and communities doing the same around us and around the world.

When pastors, or lay people, or the church as a whole debates what a pastor is or does, the reality is that in some sense there is still agreement. The different ideas or styles still fit within the scope of a pastor.  And yet, all the debates fail to return and remind us of the core.

Pastors bring the Church to the church.

6 thoughts on “Why Can’t Pastors Agree on What a Pastor is?”