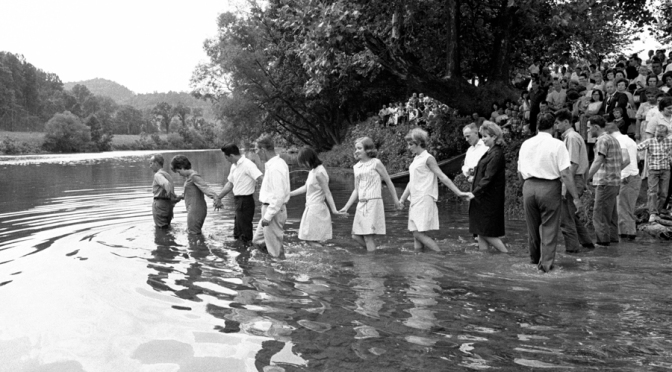 Jesus came from Galilee to John at the Jordan, to be baptized by him. John would have prevented him, saying, “I need to be baptized by you, and do you come to me?” But Jesus answered him, “Let it be so now; for it is proper for us in this way to fulfill all righteousness.” Then he consented. And when Jesus had been baptized, just as he came up from the water, suddenly the heavens were opened to him and he saw the Spirit of God descending like a dove and alighting on him. And a voice from heaven said, “This is my Son, the Beloved, with whom I am well pleased.”

Imagine wading knee deep into the water. The water swirls around our feet. It is cool, and refreshing. The movement is gentle and easy. It feels good to be in the water.

We have been floating down the river for a while now. Each year, we hop into the boat together and start the trip all over again in Advent. We float towards Christmas and through Epiphany. It is a journey that is familiar yet also new each time we take it. It is a Journey that begins with end times, that stops to hear John’s sermons and questions. Then it makes its way, with Mary and Joseph to the stable manger. The journey flees with the Holy Family to Egypt to avoid Herod’s murderous actions, and we also come with the Magi to worship this baby revealed as God.

Today we pick up speed and fast forward 30 years, we float down the river Jordan where Jesus is baptized by John. Jesus’ baptism is an unusual story, an uncomfortable scene for Christians. Why does Jesus need to be baptized? For forgiveness of sins? Repentance? What does it say about John as he baptizes instead of being baptized? In many ways the story of Jesus’ baptism invites more questions as we hear it again.

In Advent, we heard John’s preaching on the river bank. His stiff condemnation of the crowds and his warnings of the Messiah. This time, when Jesus shows up, John seems very different. The confidence and boldness are gone. He is indecisive and questioning. Jesus insists on being baptized. And so John relents, without a fight. This doesn’t sound like the John of a few weeks ago.

But John and the crowds do not see what is going on. They are hoping for a powerful Messiah. A warrior who will end injustice and who will remove foreign powers from control in Israel, but Jesus is not those things. It is the beginning of the problems that John, the disciples, the crowds, the Pharisees, scribes and temple authorities will have with Jesus. Some will want an ally, some will want a powerful warlord, some will want Jesus to go away. But Jesus simply refuses to fit their categories. Jesus is going to show us God in ways that don’t see.. that we can’t see… that we refuse to see.

Remember the feeling of standing in the water, feeling the cool fresh flow around our legs? Well the further we float, the more the current picks up. The gentleness is replaced by force and weight. The water doesn’t smoothly pass by. It pushes and grabs, it pulls and drags. The cool gentle stream that cooled our feet now pulls us in and drag us along. The power of the river is more than we could have ever imagined.

Like the crowds who gathered along the banks of the Jordan, we gather to wait also. We are waiting for the world to get better. But it doesn’t.

As we tried to pause and rest over Christmas, Life and Death soldiered on in the world. There were still tragedies, shootings, war and illness. The news of violence still bombarded us from our newspapers, radios and TVs.

The world hasn’t changed all that much since John and Jesus met in the river. Sure, we drive cars, live in heated houses and can talk to anyone on the other side of the planet instantly. But, like the crowds who stood listening to John, our world still is filled with violence and death. More shootings in the news, violence in Turkey and Syria, scandal among political leaders.

The weight of all of this threatens to drown us in the inability to care any more. We hear the reports, read the news articles and it is too much to take, too much to grieve for. Not only is it hard to see what is going on as Jesus is baptized by John, it is hard to see where God is at all.

Today, it might feel like the cool refreshing water of the river has pulled us in and dragged us under. The current is churning and spins us about. We bounce in all directions, sputtering for air, aimed over the cliff, over the waterfall.

This is not what the river journey begun in Advent is supposed to be like.

This is not what God is supposed to allow to happen in the world.

We are not supposed to drown in the waters of grief and apathy!

And a voice pierces the chaos.

“You are my beloved. With you I am well pleased”.

Words of promise, words of hope.

As John dunks Jesus down into and then brings him up out of the water, as breath and air flood back into empty lungs, God speaks. God speaks in a way that hasn’t been heard since the beginning of creation. God speaks and the world is transformed.

We tumble over the waterfall, we plunge into the deep pool at the bottom. We are squeezed and crushed under the weight, we can’t tell which direction is up. Death under the waters seems imminent.

And then all of a sudden, while we are tossed about in the churn, not knowing which direction is up or down, we pop up and out of the water. The rushes back into our lungs. This is where God’s action begins. In drowning, in death. This is as strange a place as we can imagine God to be working. And yet, God speaks as Jesus comes out of the water “You are my beloved children and with you I am well pleased”. What a weird and wonderful God who can push us below the surface in order to make us His own. In order to give us new names as child of God, as Christian, as beloved.

This is why John doesn’t know what is going on when Jesus asks to be baptized. This is why we cannot see God working in the world. It is too radical, too unbelievable.

And yet, this is promise that was made to us in the waters of Baptism, and it is the promise that is renewed each day and remembered each time we witness another child being drowned AND raised in these waters of life. It is a promise made that in the place we lease expect it, in death God is showing us something new, something life filled, something surprising. Something that can come only from a God like ours.

A God who comes into the world as baby born to a unwed teenage mother,

a God who lives a poor carpenter in 1st century Israel,

a God who died on a Roman cross as a common criminal,

a God who was raised from the dead and who in turn calls us to be drowned and then raised,

New life can only come from a God who does not act like we believe God should.

The radical God of water and Baptism comes to us in ways that are so unimaginable and so crazy, that we can hardly make them out. The journey that God is promises is not easy or gentle. The results of God’s work in the world is rarely what we imagine or hope for. Yet, as this unexpected God meets us in our world, and on our terms, we cannot help but be drawn in to this unexpected God whose story has become our story. Whose story we tell over and over again.

As we float down the river of Advent and Christmas, as we pass by Jesus and John in the river, we see again and anew the marvel of God’s love for us. We see a God who not only pushes us below the water to die, but who pulls us out again so that we may rise into new life. And today, we hear a God who speaks through chaos

“You are my beloved Children. With you I am well pleased.”

One thought on “Floating Down the River with Jesus”