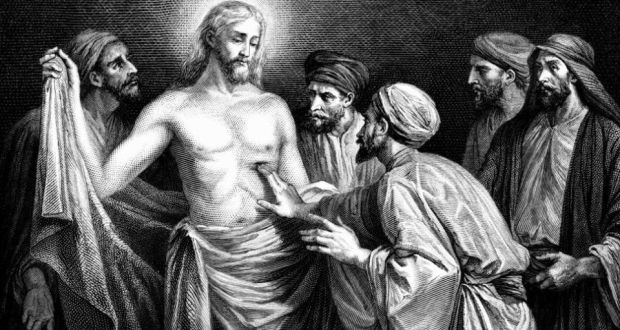 Then he said to Thomas, “Put your finger here and see my hands. Reach out your hand and put it in my side. Do not doubt but believe.”

Every year we get Thomas. Every year, on the 2nd Sunday in the season of Easter we hear his story. And it can be a little tiresome, especially as the preacher. It can be tiresome to think of something new to say about this skeptic and his disbelief. And maybe for you hearing about Thomas year after year is boring or frustrating, hearing a message about believing despite evidence, or about having faith in the witness of those who tell you the story.

But this year the Thomas story seems different. In fact, this year the whole story, the story of Jesus from beginning to end, feels different. Maybe it started last fall with the Paris attacks and the shadow they cast over Advent and Christmas. Perhaps it is the shooting and violence we hear about non-stop, or maybe it is the racism and sexism that seems to hit the airwaves daily with people like Donald Trump and Jian Ghomeshi making the headlines.

The Thomas story seems different because it feels harder to care about the evidence like he seems to. We are used to doubting everything these days, including the evidence. There was a time before the World Trade Centre Towers fell on 9/11, back when Jean Chretien was Prime Minister, only one Bush had been president, the internet was only for computer nerds and Canadian teams had recently won the Stanley cup. Back then the world was relaxed enough and people had enough time to question whether or not Jesus even existed, Thomas’ question seemed like a legitimate challenge to faith and the church.

But not so these days. It is hard these days to worry about such frivolous objections to Christianity, when much bigger ones are out there, like politicians who use faith for political gain, along with racism and sexism. When the church has endured sex scandals, the fallout from residential schools, discriminatory policies about LGBT people and so on.

But as usual, just because we are used to a story being told in one way, doesn’t mean we have it right.

On this second Sunday of Easter, we are transported back to the first Easter evening. That morning, the women had gone and reported that the tomb was empty (just as we heard last week). The disciples didn’t believe the reports, because they never believed what women had to say. And instead they are hiding away. Hiding because they are frightened of those in power and the authorities. Those same authorities, the temple priests, King Herod, Pontius Pilate… the ones that killed Jesus and who might be coming for his followers next.

And then Jesus appears among them. He offers them his peace, and breathes on them the holy spirit and goes on his merry way. But Thomas misses the whole thing. And when he does re-join the others, he will have none of their story. He wants to see Jesus himself, to touch his hands and side. Thomas seems to want evidence.

Or at least we think.

The world that Thomas lives in is less like the world of 20 years ago and more like our world today. We used to have trust for those in power and authority. We used to feel safe and protected, we use to trust that politicians had our best interests at heart, that our employers wanted to see use succeed, that our neighbours were trustworthy, that churches were places that proclaimed truth.

For Thomas, the powers and authorities of his world were dangerous, the governors and rulers were not only untrustworthy but likely wouldn’t hesitate to kill any one they found inconvenient. The market places were full of cheaters and jobs were hard to come by. People living under oppression wouldn’t hesitate to get in good with the Romans by betraying this silly band of Jesus followers. And religious rulers – well they orchestrated Jesus’ death in the first place.

Like Thomas, we feel less and less sure of our political leaders – especially with the Donald Trumps of the world vying for power. We know employers are trying to make the most profit, which means cutting costs at every corner. We don’t trust our neighbours because they are too different, they speak different languages, worship in different ways, they don’t seem to hold our values. And of course even though we are attending a church and seeking truth today, we know that churches and religious leaders often have agendas.

And so living in a world much more like Thomas’s than we ever have before, maybe we can see Thomas’ objection in a new way.

Maybe Thomas isn’t asking about the evidence, about scientific proof.

When Thomas says that he need to put his hands on Jesus’ hands, in Jesus’ side, in order to believe – ‘believe’ isn’t the best word to use for the greek. The best word would be trust.

And having problems with trust is something we know well.

And isn’t that what we want to know too. Not whether can we believe that someone was raised from the dead. But is Jesus someone we can trust? Is this message of the Kingdom of God coming near, of the call to go preach the good news, of resurrection and new life being given to us… are these things we can trust? Things we can stake our life and well being on? Are they safe?

We are coming to know what an unsafe world feels like more and more, and so maybe we now understand Thomas’s real objection better than we ever have before.

And so Thomas wants to know who he can trust in a world were there isn’t much trustworthiness to be found.

Yet in a world severely lacking in trust, Jesus shows up.

Jesus shows up and offers Thomas the very things that Thomas needs in order to trust.

Jesus shows up and offers the holes in the hands and in his side.

For Thomas the wounds and scars tell him that Jesus has encountered the dangerous powers and authorities. Jesus has been betrayed and killed.

But Jesus hasn’t been destroyed. The dangerous powers and the authorities did not overcome.

Jesus is trustworthy because all the untrustworthy things of the world did not have the final say.

Jesus is trustworthy because not only did he overcome the dangerous powers and authorities, but he came back for the disciples. He came back so that they, so that Thomas, so that all of us would be shown the way through – they way through the danger and peril. They way that is worth the risk and uncertainty. The way through that is not safe, but that ends with life.

Jesus shows that he is trustworthy, that all those things that he said about dying and rising on the third day, about the Kingdom of God coming near, about God’s love and forgiveness for sinners are worth the risk, worth trusting in a world where there is precious little to trust in.

And when he sees Jesus, when Jesus offers his hands and side, Thomas has his answer. Not the evidence we tend to think this story is about, but his answer to his fears and worries, to his uncertainty and insecurity.

Because Jesus shows that he knows the way to the other side of this messy and terrifying world we live in.

And today, when our world is so much like Thomas’s and our fears and questions and worries are like Thomas’s Jesus gives us our answer.

We too are shown the wounds and scars of the body of Christ. Jesus gives us a body, a community that has lived with the dangerous powers and authorities. The Body of Christ has been living its way through a world with precious little to trust for 2000 years. And the risen Christ comes to us again and again, week after week, year after year to show us that the wounds and scars of crucifixion, did not destroy us. That the Kingdom of God is always near to us, that God’s love and forgiveness are for given for us, that death will not be the end of our stories, but that Jesus’ resurrection is our resurrection too.

Every year we get Thomas, and it can feel a bit tiresome… until the world changes and we change… and all of sudden it is like hearing it again for the fist time… it is like being there with Thomas, as Jesus comes showing us hand and side, reminding us of God’s trustworthiness.