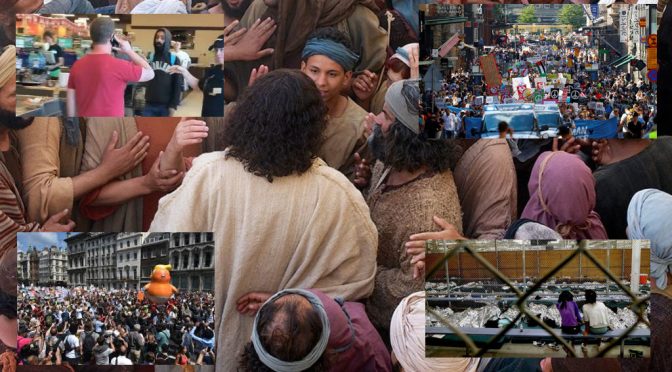 The apostles gathered around Jesus, and told him all that they had done and taught. He said to them, “Come away to a deserted place all by yourselves and rest a while.” For many were coming and going, and they had no leisure even to eat. ….When they got out of the boat, people at once recognized him, and rushed about that whole region and began to bring the sick on mats to wherever they heard he was. And wherever he went, into villages or cities or farms, they laid the sick in the marketplaces, and begged him that they might touch even the fringe of his cloak; and all who touched it were healed. (read the whole passage)

We are coming to an end point of sorts. After this week, we will detour from Mark’s Gospel to hear 5 Sundays from John on the Bread of Life. And this scene from Mark today, is the culmination of something building in the background of these stories of Jesus’ preaching, teaching, healing, exorcising demons and arguing with the pharisees.

Today, the crowds move from the background of the stories and take centre stage. The crowds were there as Jesus’ family tried to take him away and Jesus compared the Pharisees to Satan, they were there when Jesus taught in confusing parables which he only explained to his disciples in private. They were left behind as Jesus and the disciples rode that boat out into the storm. They were silent witnesses as Jesus healed Jairus’ daughter and the bleeding woman. And they watched as Jesus could do no deeds of power in his home town.

After sitting always in the background and even after being avoided by Jesus and his disciples, the crowds, the poor, unwashed masses following Jesus around Galilee looking for hope and healing finally have their moment today.

As Jesus and the disciples feel the pressure of the crowds, Jesus suggests that they all find some place quiet to go. So again, they try to escape the crowds by boat. But this time the crowds will not be fooled. They run around the shore ahead of Jesus and disciples.

And while it isn’t totally explained just who these crowds are, the stories that they have been a part of and the background suggest that these are likely the common people of Israel. The poor, the disadvantaged, those on the outside, those who have little power in their world, those who excluded from political and economic upper echelons of society. Some might be beggars, those who bear disease or infirmity, but also everyday average people who try to work and care for their families, to eek out a living in Roman occupied Israel, which was a harsh and difficult place to live. These are the faceless, nameless masses of the world. The kind of people you pass on the streets, or in the mall or at the grocery store without much thought. People whose lives are mostly normal, if not unremarkable. People who don’t really get names or details of their own, they are just crowds.

And the crowds have been ignored and forgotten for long enough, there is no pushing them aside anymore. They have come to Jesus and Jesus cannot keep putting them off anymore.

Maybe you feel the same way, but I can get what Jesus is feeling like today. The crowds of our world seem to asserting themselves in much the same way. Flip on the news and there are crowds gathering around every corner. Crowds on the streets of London and Helsinki to greet a certain world leader. Huddled masses appearing at the borders between Mexico and US, and the US and Canada. Crowds seen in fenced-in detention centres separating families, crowds at grocery stores looking on as some lunatic in a red t-shirt tries to call the cops because someone dared to have dark skin and a beard in his presence.

The crowds seem to coming up front and centre in the news these days, in our social media feeds, and even on our doors steps.

And it is easy to see those crowds as outsiders. As the lost and forgotten, the alien and strangers of our world. It can be overwhelming to imagine what we could possibly do for them Should be out in the streets with protest signs too? Should we be at the border with food and clothes to help welcome the lost and forgotten before their are thrown in detention centres? Should we step in front of a raving and angry person making a scene in a public place?

These don’t feel like our problems, they are the problems of other people, the problems people on the outside, foreigners and aliens and strangers.

As the crowds press in on us and give us hardly a moment to rest or eat these days… Paul has some words for us. Some words first given to the Ephesians, but just as applicable today.

“…remember that you were at that time without Christ, being aliens from the commonwealth of Israel, and strangers to the covenants of promise, having no hope and without God in the world.”

Remember that you were once outsiders too. Outsiders to God’s love with no hope in this world.

As Jesus and the disciples land their boats back ashore, their attempt to escape the crowds seems to have been for naught. They crowds are pressing back in again, searching for some kind of hope and healing.

But this time something shifts in Jesus. Jesus has compassion for these desperate crowds. He sees them for who they are and what they need. They are lost and forgotten. They are aliens and foreigners. They are outsiders.

And so Jesus finds them.

And all of sudden, in a subtle but important shift, Jesus isn’t trying to escape anymore. He simply lets the crowds be. He lets them be around him, near him, and come to him. They are a part of who and where Jesus is. They are part of the family.

As we sit in our comfortable churches, it is easy to feel like insiders, and even difficult to identify with those crowds on the streets of London and Helsinki, or the crowds in detention centres are borders, or the crowds witnessing racism in grocery stores.

And as people of faith on the inside, we can even wonder where is God among these crowds today? Is God at work in the crowds in the streets of London and Helsinki? Is God handing out food and blankets at the borders? Is God stepping in between that lunatic at the grocery store and the poor victim of his rage?

“…remember that you were at that time without Christ, being aliens from the commonwealth of Israel, and strangers to the covenants of promise, having no hope and without God in the world.”

“But now in Christ Jesus you who once were far off have been brought near by the blood of Christ. For he is our peace; in his flesh he has made both groups into one and has broken down the dividing wall, that is, the hostility between us”

Here is the thing, Paul isn’t reminding of what it feels like to be outsider… most of us were brought into this family of faith as insiders as babies and we don’t remember being outsiders.

Because here as we gather from far off, Jesus brings us near. Jesus gives us peace in reconciliation and forgiveness. Jesus makes us one in the Word of Good News that we hear, and Jesus breaks down the wall, the hostility between us.

And Jesus is first here among this crowd and in these streets between us, gathering us at this table. And Jesus brings us bread and healing at the table, at the border between heaven and earth. And Jesus steps in-between us and sin and death to proclaim that those things are not okay and will have no place here anymore.

Paul reminds us that we were all once outsiders and and aliens and strangers. But Jesus has brought us in to the love and mercy of God, and Jesus continually brings us in, continually makes us – and the whole world – part of God’s family.

And so today, the crowds press in, on Jesus and on us. Yet are reminded that we are not the insiders removed from it all that we thought we were… Rather, we are the crowds too, and we now have a place near to Jesus, in the household of God.