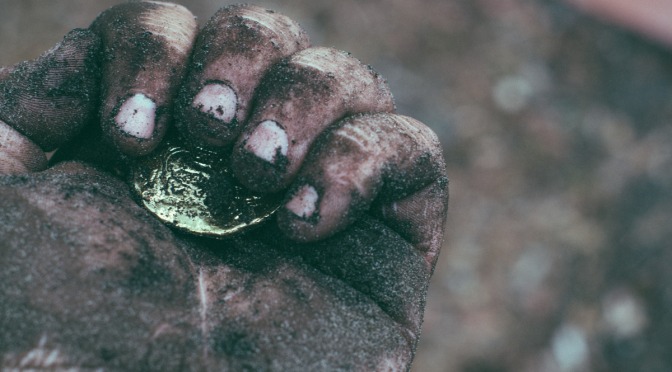 …Then the one who had received the one talent also came forward, saying, ‘Master, I knew that you were a harsh man, reaping where you did not sow, and gathering where you did not scatter seed; so I was afraid, and I went and hid your talent in the ground. Here you have what is yours.’ But his master replied, ‘You wicked and lazy slave!…As for this worthless slave, throw him into the outer darkness, where there will be weeping and gnashing of teeth.’” (read the whole passage)

We are coming to the end of the church year. And for nearly six months, we have been hearing stories from Matthew’s gospel. For the the past few weeks, it has been parables from Holy Week. During those short few days between riding into Jerusalem on a donkey, being hailed as King and then being arrested and put on trial, Jesus took the opportunity to preach and teach. The parable of the talents is the last parable that Jesus tells before being arrested and put on trial.

The parable of the talents is a familiar parable. As a rich man prepares to go on a long trip, he gives three trusted slaves large sums of money to attend to. 5 talents to one, 2 to the next and 1 to the last. And when the man returns the first two have doubled their share. But the third, being fearful of his harsh master has buried his talent. When the slave returns just the one talent, his master is not pleased, expecting more.

To our profit and productivity obsessed world, the master seems well justified in his anger at this slave. He could have at least earned basic interest if the slave had just put the money in the bank.

And that has often been the message preached by modern Christians, especially when we expand the definition of talents beyond money to the other more common usage of talents. The talents that many preachers talk about with this parable are gifts of time, money and abilities. We all have been told that God gives us these gifts and we should give back to the church.

But is this parable really about an encouragement to use our gifts, and abilities and time for Jesus? Or is that a direction that preachers take because it is too hard to pass up an opportunity to preach about stewardship?

On the surface is sure sounds like the master (or God) is telling the slaves (or us) to make good use to the talents we have been given in this life… and yet when we dig past the surface there just might be something else going on here.

So is this harsh and greedy Master really a comparison for God? Does the God of stable mangers, the God of nail pierced hands and feet, the God of empty tombs and being known in breaking bread really operate this way? Does God really say “look at all I have given to you… now you owe it back twice over… or at least give me the going interest rate.”

If this harsh and greedy and rage filled master is not an example of God, is this parable really about encouragement to us our “talents” to the fullest?

In strictly economic terms, a biblical talent is no metaphor for gifts and abilities. It is a measure of money. One talent represented about 20 years wages, or the working lifetime of a day labourer. So the master hands out 8 life times worth of money to 3 slaves to manage, and when his 8 talents are turned into only 15 he flies into a rage. Or to put it into modern terms, 20 years of the average annual income in Canada is $1,000,000. So this master is enraged when his 8 million only grows to 15 million instead of 16.

Wow, what a disappointment.

This master sounds not so much like God, but more like that cranky Dragon from the TV show Dragon’s Den who was all about the money. Or that other reality tv star turned blowhard politician whose catchline is “You’re fired!”

But perhaps more troubling is how easily Christians have tried to make this harsh and greedy master virtuous. How deeply have we been enmeshed in the cult of money, power and success that we would compare economic success with faithfulness and salvation.

And rather than some kind of lesson on putting our gifts and talents to their best use, it is this troubling reality that Jesus is more likely pointing to as he tells the parable to the crowds and religious authorities.

If the business of faith and salvation were up to us, up to sinful human beings, we would make it an issue of wealth and power. In fact, in Jesus day it was. Only the rich and powerful could afford to be righteous and pure according to the laws and traditions of ancient Israel. And for 2000 years of Christianity, it has frequently been portrayed in this way – faith tied to the amount of wealth and power that one holds. Salvation has often been something that could be bought.

Jesus is revealing to those who will crucify him for being God in flesh that the reason is their own desire to be in control of salvation, to dictate the terms of our faith based on money and power. Jesus is the ultimate threat to that desire. If Jesus is indeed the Messiah, God’s Son, than humanity cannot be God. And if we are not God, then no amount of power, or wealth, or self-righteous greed and anger can save us.

And as Jesus prepares teaches the crowds with these parables he does so as he is about to go to the cross.

Paul’s letter to the Thessalonians fills in the rest of the story. Paul tells us how it is that God is truly enacting salvation. Paul writes, “For God has destined us not for wrath but for obtaining salvation through our Lord Jesus Christ, who died for us, so that whether we are awake or asleep we may live with him”

It is not the wrath of the greedy master than will save or condemn us.

It is not whether we can double the talents we have been given, or whether we bury them in the ground.

It is not an economic transaction that is required for Salvation.

To the Thessalonians, who were feeling like that third slave, fearful and hiding their talents in the ground, Paul declares that it is the Lord Jesus Christ who died for us who obtains our salvation.

And whether we feel like the first slave who doubles his talents, the third who buried his or even the master greedy and filled with rage… is not us and what we do but the Lord Jesus Christ who obtains salvation.

It is Lord Jesus Christ who gives up all god-like power and who comes into human time and space, who breaks into our productivity and profit focused world.

It is our Lord Jesus Christ who reveals to us our sinful nature and our attempts to make wrath and rage and greed into virtues.

And it is only our Lord Jesus Christ who truly saves us from sin and death. Only Jesus who obtains salvation for us. Only Jesus who brings forgiveness, mercy, reconciliation and grace into our world.

Jesus prepares us with forgiveness instead of wrath.

Jesus prepares us with the word of life rather than the word that casts out into the outer darkness.

Jesus prepares us with the water of baptism that wash us of our greed and desire for power.

Jesus prepares us with the bread and wine of salvation, food that fills us like no amount of profit or return ever could.

Jesus is showing us in the parable, on the cross and here in Word and Bread and Wine that God’s Salvation is given freely. God gives is freely to us and for all.