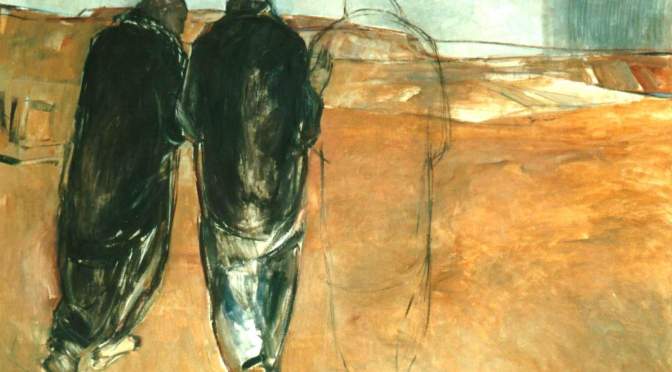 While I am late in posting, thanks to a guest preacher Rev. Courtenay Reedman Parker, and her sermon from the 3rd Sunday in Easter. You can find her on twitter: @ReedmanParker

13Now on that same day [when Jesus had appeared to Mary Magdalene,] two [disciples] were going to a village called Emmaus, about seven miles from Jerusalem, 14and talking with each other about all these things that had happened. 15While they were talking and discussing, Jesus himself came near and went with them, 16but their eyes were kept from recognizing him. …34They were saying, “The Lord has risen indeed, and he has appeared to Simon!” 35Then they told what had happened on the road, and how he had been made known to them in the breaking of the bread.

Three weeks into the season of Easter and we continue to hear the stories of that first day. We continue to be placed back with the disciples. In their grief. In their sadness. In their un-belief of what has transpired.

Three weeks into the season of Easter and we continue to hear the story of resurrection. New life. Changed life – because the way it was is not the way it is. And everyone knows it.

Three weeks into the season of Easter and we continue to hear stories of the disciples encountering the risen Christ.

This first day, Easter day, is important. Three weeks in and we are still hearing about its impact. Today we encounter two disciples on the road to Emmaus when Jesus shows up along side them.

Only Cleopas and the other disciple don’t know that it’s Jesus – they don’t recognize him.

This detail is significant. But they aren’t special. Last week the disciples do not believe that Jesus is amongst them until they hear him speak words of peace and see and touch his wounds. The women, too, do not immediately recognize Jesus for who he is – instead thinking he is a gardener.

In their minds, Jesus has died. It’s done.

And this reality is heartbreaking.

This first day when the disciples are between Jesus’ death and knowing and believing that the resurrection has taken place reveals how difficult is for the human condition to move from the way it was to the way it is.

And it is when Cleopas is talking to Jesus – not knowing it is Jesus – that this becomes so clear. Jesus asks the two men what they are talking about, and Cleopas, surprised “Are you the only stranger in Jerusalem who does not know the things that have taken place?”

Somewhat ironically he’s asking him, have you been living behind a rock these last few days? …. Well, yes, yes I have.

So the disciples tell Jesus about who he was to them, and how he had been handed over to death. We hear about who they had hoped Jesus would be – that he had come to redeem Israel – but instead he was put to death.

The way they thought the future would unfold did not turn out as they had hoped.

The person they thought Jesus was, the one they expected him to be, did not turn out as they had hoped.

The stories they are now hearing about Jesus being raised from the dead is not how they expected life would unfold next. It’s not how they anticipated God would act.

The disciples find themselves on a long road between what they had hoped for and exclaiming “he is risen indeed”. It is an uncomfortable place to be.

Perhaps we know a little something about what happens when the things we hope for don’t unfold the way we anticipate.

Perhaps we know something about the discomfort of the in-between-ness between what has been and what will be. Even if things “will be ok” eventually, death of any kind stings. Death is still death. Our emotions are the same. Our grief is still the same.

It is hard to see Jesus when we are expecting one thing and another happens.

The disciples arrive where they think they are going, only to have their eyes opened in the retelling of the sacred stories – Jesus’ story… God’s story – and in the breaking of the bread. It’s then that “their eyes were opened and they recognized him”.

Like the disciples, it is hard to see Jesus walking alongside us when our expectations – our hopes of who Jesus will be, of how God will act or intervene or call us into relationship – blinds us to the real Jesus, who was there the whole time.

It is hard to see Jesus when we are preoccupied with life’s struggles. Hard even when Jesus is walking with us, telling us what’s what.

The good news is that God in Jesus walks the road with us. In doing so, God helps us let go and reframe our issues, and once they have been reframed, the fact that Jesus was there the whole time becomes apparent.

And, like the disciples, Jesus will walk with us down the wrong road, even while calling us in a different direction.

Three weeks into the season of Easter and we too are experiencing an in-betweeness as a congregation. We know that life will not be as it was, but we aren’t yet sure of the way it is or will be.

What we do know is that God promises to be with us.

God in Jesus walks with us down all the roads of life.

God in Jesus walks with us in the in-between places.

God in Jesus walks with us when we are in the midst of dead ends.

God in Jesus leads us down new paths.

Three weeks into the season of Easter and we are still hearing stories of that first day, still with the unbelieving disciples, and when all we think we see is death, Jesus is still walking out of tombs in order to show us new life. AMEN.