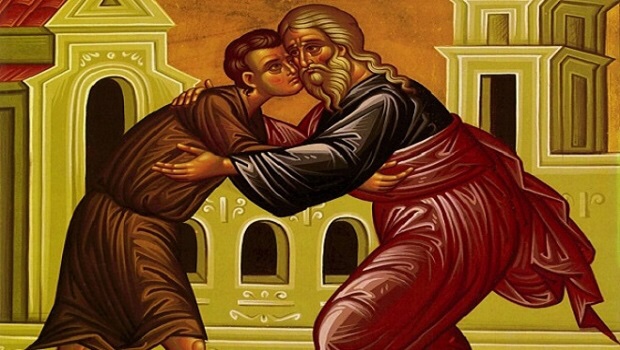 But while he was still far off, his father saw him and was filled with compassion; he ran and put his arms around him and kissed him. 21Then the son said to him, ‘Father, I have sinned against heaven and before you; I am no longer worthy to be called your son.’ 22But the father said to his slaves, ‘Quickly, bring out a robe—the best one—and put it on him; put a ring on his finger and sandals on his feet. 23And get the fatted calf and kill it, and let us eat and celebrate; 24for this son of mine was dead and is alive again; he was lost and is found!’ And they began to celebrate. (Read the whole passage)

We are four Sundays into the season of Lent, and the journey to so far has been a challenging one. We came down the mountain of Transfiguration to find our selves in the valley of ash. We then followed Jesus into the wilderness of temptation, and then to Jerusalem to lament over God’s people. Last week the crowds asked big questions about suffering and who is to blame and Jesus answered with the curious parable of the fig tree where the gardener advocated for the tree, “give it another year.”

Today Jesus continues to talk to the crowds of Jerusalem, the Pharisees and tax collectors. And the parable that he tells is one of the most iconic of scripture – The Prodigal Son.

The story of the son who spend his inheritance on dissolute living only to return home, hat in hand, is one that still carries some cultural memory. You can still hear the occasional tv show or movie throw out the label ‘prodigal son’ in reference to someone who returns home from an ill-spent time away, usually involving drugs, alcohol, crime and/or jail time.

The image of the prodigal son holds a certain place in our minds and in our larger culture that pushes us to understand this parable in ways that might not be the ones intended by Jesus as he told it.

In a facebook group of mostly Lutheran pastors that I am a part of, someone admitted that they had grown up being taught that “prodigal” meant “naughty.” And many more pastors admitted to the same thing. And while I won’t ask you to raise your hands, I am sure many of us grew up with a similar understanding of the term prodigal.

Of course, prodigal doesn’t mean naughty. It means lavish or abundant or extravagant or wasteful even. But even still the fact that we label the son as prodigal speaks to a common understanding that has been attached to this parable over generations.

The usual understanding of this parable goes that the son who asks his father for his inheritance and goes off to spend it on a good time in a far away place has committed some terrible, near unforgivable sin. After realizing the error of his ways, he returns to his home to be surprisingly welcomed by his father.

Yet, it is actually not totally clear what his great sin is. Is it asking for his inheritance prematurely? Is it leaving his family duties behind for another life? Is it the dissolute living that he engages in in a far away land? Or is the most Protestant and capitalist of sins, not putting a substantial sum of money to a profitable use?

The term prodigal might best apply to the last one, yet Jesus was not the one who named the parable. Rather English speakers did about 1500 years after the Gospel of Luke was put to paper.

In fact, only when the title is put aside, we are finally able to shed some new light on this story.

The parable begins not with the son, but with a man who has two sons. The younger of which asks for his inheritance… yet, this is was no simple a matter for the people of Israel. Inheritance wasn’t just a convenient equal split as it often is for us. In the ancient world, the eldest son received a double portion of inheritance. In this case, the elder son would received two thirds of his father’s wealth. The younger would received one third. But this did not include the land, as the land was understood to belong not just to one man but to the whole family or tribe of the landowner. The land was meant to provide for all those who lived on it, not just for the landowner. The elder son would not just inherit the wealth of his father, but also his obligation to manage and care for the land, the family, and the servants who worked the land.

The younger son would become the right hand to his older brother, the first of his brother’s servants.

Often when we tell this story, we imagine some great change in the younger son, someone who learns the error of his ways. Yet, as a new life in a foreign land doesn’t materialize, the younger son finds a job as a hired hand. Quickly, realizing that if this is to be his lot in life, he might as well do it with family than with strangers. And so he goes home, not as a changed man, but back to the destiny that was always his to begin with. To be a servant in his father’s household.

And despite his father running to meet him on the road, it is this understanding of himself that the the younger son says his las words in the story,

“Father, I have sinned against heaven and before you; I am no longer worthy to be called your son.”

And then there is the often forgotten older son… the son who is grumpy about life in general. Who despite inheriting a double portion of his father’s wealth, is mostly inheriting duty, obligation and responsibility. The responsibility to managing wealth and land not for his benefit, but in order to provide and care for an entire community.

Perhaps he too feels trapped in a destiny that he may not want. And just like the younger son who begins and ends the parable in the same place, the older son begins bitter about his lot in life and finishes bitter, angry at his father’s generosity towards his younger brother.

In fact, understanding these brothers in this way begs us to ask, who, in fact, is the prodigal one? Who is the one who wastes something?

And again, there is a problem with the familiar title of the parable.

Despite the Prodigal Son’s relatively recent English name, our Eastern Orthodox brothers and sisters have called it by a different name for much longer…

‘The Parable of the Loving Father’

Our first clue as to who this parable might be about came in the very first words:

There was a man.

It is usually the case that the first person mentioned in a parable is who the parable is about.

There was a man who had two sons.

And it is the Father whose story just might be the most significant.

As the younger son comes looking for a new life, the Father gives his son the opportunity to make a new life.

And when the younger son returns home, the Father runs out to meet his son, to welcome him home with open arms.

Then when he Father throws a party for his lost son, the Father also goes out to find his elder son, and to welcome him to the party.

And as the older son complains that his Father never provided anything for his enjoyment, the Father reminds his older son that all that the Father has is also his son’s.

While the two sons are stuck inside themselves, stuck only seeing the burdens they may carry and the things they might miss out on… the Father continually seeks them out in order to love them, in order to remind them that they are more than they imagine, that they are the beloved children of their father, they belong to their Father’s family and community, and they forever bound to one another as siblings.

Of course, this parable is about the Loving and Prodigal Father who seeks his lost children.

And of course this parable is a reminder of just how God is with us.

Each and every time we come home to God’s house, God runs to meet us in the waters of baptism, and lavishly reminds us of God’s mercy and grace given in the Word, and God welcomes us again and again to the table, again and again to the feast of heaven. The feast of heaven where our bitterness and shame, our burdens and loss are left behind so that we can reminded again of who we are.

That we are God’s beloved children that God will spare no cost to find.

An important reminder as we journey towards the end of Lent, and towards the heart of human messiness on Good Friday… That there is no place and no thing that can keep God from loving us, not even the cross.

And The Loving and Prodigal Father is the one running to meet us on morning of the third day.