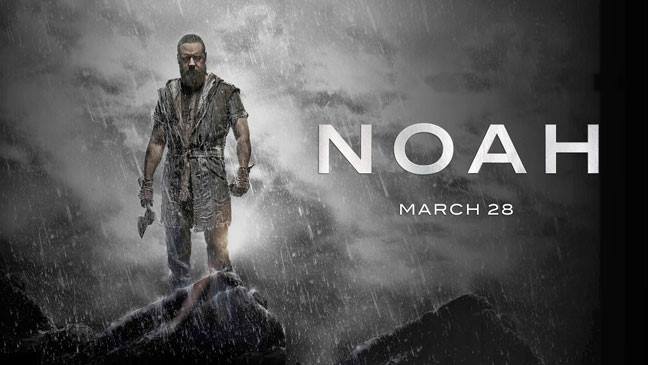 It was a beautiful story in terms of its cinematography, the visuals were stunning.

Now, a lot of the praise for Noah ends with the visuals. For some reason, many seem to think that Noah doesn’t follow the biblical narrative, and so the critique of Noah then continues with the movie’s faithfulness to the story… or lack there of.  Albert Mohler has written an absurd movie review, which makes me question whether he has even seen the movie or read the story. To all those who are complaining that Noah deviates from the flood narrative, I just want to say,

“Have you read the flood narrative recently?”

Noah is a deeply scriptural AND theological film. It tells the story of the biblical flood in a way that we need to hear it. No… Noah is not a word-for-word retelling of the flood epic found in Genesis 6-9. But any filmmaker who sets out to put Genesis 6-9, as written, to film will have missed the point before beginning.

Director/writer Darren Aronovsky has produced something as faithful and with as much integrity to the text of Genesis as I can imagine. The flood epic’s context (as in the stories that preceded and linger in Noah’s background) is always present in the movie. Aronovsky has not ripped this story out of the bible, but instead uses themes and images from all over Genesis.

Noah shows that Aronovsky has so thoroughly researched this story, that he puts most Christians and some scholars like Mohler to shame. Noah is a very biblical movie. Noah is a brilliantly biblical movie rich in scripture, unlike many other movies about the bible.

But let’s talk about Genesis 6-9 first.

Anyone who has actually read the flood story would know that it is a very redundant story. In fact, everything seems to be repeated over and over. It is almost like two different versions of the story have been layered on top of each other to make one story.

Well, that’s because there are two stories. Two versions, different details. In one version it rains 40 days, another 150 days. Noah is told to take a pair of each kind of animal, then he is given instructions to take 7 pairs of clean and one unclean. The family enters the Ark twice.

The story of the flood does not belong to Christians. It doesn’t belong to Jewish religion. It doesn’t really even belong to the Bible. It is an Ancient Near Eastern story told by the people living in the floodplain of the Tigris and Euphrates rivers.

So when Darren Aronovsky “deviates” from the biblical account of the flood, he is working with a story that already has been re-told with generous liberties taken. The flood is a re-write of another story, which is the re-write of another, etc…  However, the movie Noah does something fascinating – Noah stitches together the early chapters of Genesis with other biblical themes. The biblical flood story doesn’t do this. In fact, Noah is a character hardly referenced outside of the flood narrative itself.

Darren Aronovsky has said in interviews, that he sees Noah has his midrash. A mid rash is a Rabbinical narrative sermon. It is the Jewish practice of re-telling the biblical narratives, and filling in the gaps of the story to make a theological point. Pretty much a sermon. If Noah is a sermon, it is brilliant one.

The opening scenes of Noah are the first murder in the book of Genesis, and Cain’s murder of Abel becomes the foundation of the movie. This violent reality haunts every relationship, every action taken by Noah and his family. This murder continues being repeated, generation after generation, between brothers, between families, between peoples, between human beings and the earth. The murdering is endless, and thus ‘The Creator’ decides to start over, to wipe wicked human beings from the face of the earth.

Some would accuse Aronovsky of using the movie to spout modern environmentalist rhetoric about care for the earth, veganism even. This is not the case, Aronvosky is simply sticking to the text. Some of the earliest tensions in the Bible are the commands given by God to human beings in the creation stories. In Genesis 1, human beings are told to fill the earth and subdue it, to have dominion over it. In Genesis 2, human beings are told to serve and protect creation, to care for it and keep it. These competing views on the role of human beings towards the planet are not just a modern issue, they have been at odds since the beginning.

Lastly, there is a moment in the movie when Noah looks a lot like Abraham. Noah is Abraham’s ancestor to the 10th generation. At, what could be argued is the climax of the movie, Noah is standing above one of his offspring, knife in hand, ready to kill because of what he understands to be God’s command. This issue of families murdering one another, that begins with Cain and Abel, is not actually resolved with the flood. In fact, the escalation of murder that the flood turns out to be, is no solution to the problem of humanity’s death-dealing ways at all.

And while many would claim that this moment in the movie shows us the power of the human spirit because Noah chooses not to murder out of love, I think this is about God. God, or ‘The Creator’ as God is called in the movie, has no lines. God doesn’t even take a form, but is an implied presence. ‘The Creator’s’ role in the drama is still paramount, and I think Aronovsky is telling us about the important change of mind that God has after the flood. The human problem of death, of violence, of killing one another remains. Noah foreshadows what is to come with Abraham – someone willing to murder his own child for God’s sake.

Instead, God is changed, and God finds mercy towards human beings. The characters of Noah don’t actually change throughout the story. They experience tremendous hardship and tragedy, but they remain, at the end, who they were at the beginning.

In the flood epic and in Noah, it is God who changes. Aronovsky hasn’t missed this part of the story either. Which leads me to:

The Christological Character of Noah.

In a number of scenes in the movie, Noah is shown praying. Noah prays a familiar and biblical prayer – “I can’t do this.”

At one point, Noah is on his knees asking God that this burden be removed from him. Noah might be a Genesis character, but this is a New Testament image. Like Jesus in the Garden of Gethsemane, Noah is asking that God would choose someone else.

The burden that Noah is given is not to build an Ark, not to predict a flood, not even to save the animals, as he seems to think is his burden for most of the movie. The real burden is to determine whether humanity is worth saving – whether or not humanity is redeemable.

Ultimately, we discover that this question isn’t answered, at least not by Noah’s actions. He saves his family, but in his mind this is failure. He has failed to perform God’s will for humanity, failed to wipe us all out.

However, as we see that more violence is not the solution or the way to prevent violence, God’s change towards mercy gives us the smallest clue or hint towards the dilemma facing God.

Whether Aronovsky knows it or not (and sometimes this is where stories become more than their tellers can control), God’s change to mercy is a key Christological question. With Noah, God realizes that asking humanity to redeem themselves and to prove themselves worthy of being saved is impossible. Noah realizes too that all humanity has the capability of sin within them.

The question of whether or not to save us all is really not answered until the garden of Gethsemane. As Jesus prays, “I can’t do this” it is not all about a human being afraid of being crucified. Rather, as Douglas John Hall suggests, the question of Gethsemane is whether God is going to complete the incarnation. God has shown up in flesh, God has lived in flesh, but Maundy Thursday is now the moment to decide if that last step – incarnate death – will be taken. Once this step is taken, God is going to complete the redeeming. God is going fulfill the reconciling. God-in-Christ is going to re-join creation with creator, re-join what was one in Eden.

As I watched Noah, I couldn’t help but see this question as the real issue. Is humanity redeemable? Aronovsky seems to have come to the same place that the bible comes to over and over again. Human beings just cannot redeem themselves.

And just maybe, as ‘The Creator’ shifts to mercy, Noah foreshadows a God who now knows this. God will be the one who will choose whether we are worth saving. Asking us to give up violence us will not suffice. God will need to take away the power of our violence by overcoming death. Life will become how we are redeemed. God will allow Godself to succumb – on the cross – to our desire for violence and death. And instead of responding with greater violence, with fire or flood, God will respond with resurrection and new life.

Noah is beautifully rich and beautifully deep. It is scriptural and theological to its core. If you want to see a movie about the bible?

Go see Noah. It will not disappoint.

20 thoughts on “The Christology of Noah: A Theological Review”